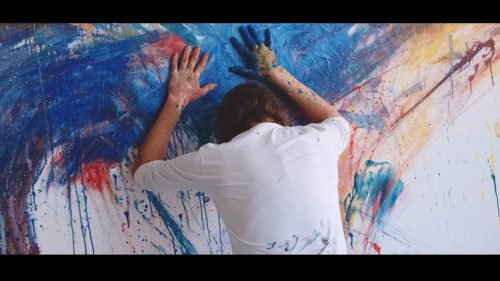 A light-filled studio. A white canvas. A driven painter.
The music video “Follow the Sun” is the first music video for the debut-album “WHAT LIFE´S ALL ABOUT” by the Austrian Band Blinded by Stardust. The Video itself shows an artist in interlude with his painting and a live-performance by the folk-rock band BLINDED BY STARDUST.
While the artist is in a sensual frenzy of colours, the band is adapting the role of the canvas. A drawing with a power act of passion, love, doubt and joy.
„Lose yourself, make mistakes, be insecure – the belief in the good can never die anyway. Life is beautiful”, says singer/songwriter Lukas Cioni, describing the intention behind the piece.

“Follow the Sun” is an upright ode to the good – direct, simple and authentic, just like the members of BLINDED BY STARDUST who paint their own special image with music.